First, I am SO sorry for the lack of updates from the inaugural entry to this blog. Sometimes real life gets in the way and I completely dropped the ball on that. To be honest, this blog was handwritten in late July and due to issues beyond my control, I never revisited it or edited it. So to be fair, it’s time to revisit the Jersey Guy for Montreal Blog.

With all of the melodrama out of the way, it’s time to talk baseball. Throughout the learning process about the Montreal Expos, I’ve watched a plethora of documentaries and videos on the 1994 team.

The more and more I see it, from an outsider’s perspective, the 1994 Expos will always be a sore point that Montreal baseball fans have truly used as the beginning of the end of Major League Baseball in their city. From financial profits lost to players not willing to come to the team via free agency, the Expos just fell into mainstream obscurity in many cases (save for the greatness of Vladimir Guerrero).

However, 1994, from a season perspective, was a phenomenal year. Besides the loaded outfield of Larry Walker, Moises Alou, and Marquis Grissom, the great 1-2 starting pitching of Ken Hill and Pedro Martinez, the double-play tandem of Wil Cordero and Mike Lansing, and the intensity of John Wetteland in the back of the bullpen, there was one piece to the puzzle that led to one of the seminal moments during that 1994 campaign: 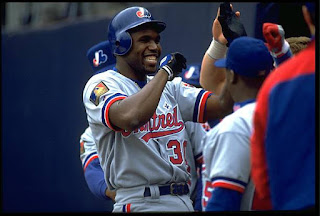 For me, the first real memory I have of Cliff Floyd is catching the final out of the Mets clinching the National League East on September 18, 2006, the day before my 21st birthday. Before that moment, Cliff had an injury riddled season with only 11 home runs and 44 RBIs; yet somehow, that moment was extremely important to a glimpse of greatness during the Omar Minaya era of the Mets (Omar is a WHOLE another tale in the history of the Expos saga. I can’t wait to write about that).

However, for fans of Montreal baseball, Cliff Floyd was homegrown talent. Going #14 in the first round of the MLB Draft in 1991, the Chicago native was a phenom on the field, leading the Thornwood High School baseball team to the state championship during his senior year.

Going through the minor leagues in a two year span, Floyd made his Major League debut on September 18, 1993 in an Expo uniform (talk about full circle with the 2006 NL East clinching catch). He only played in 10 games in 1993, but #30 became a regular the following year.

For starters, manager Felipe Alou converted Floyd, primarily an outfielder, into a first baseman, due to the absolutely loaded mentioned outfield mentioned earlier. Getting significant playing time, at exactly 100 games, Floyd batted .281 with 94 hits, 19 doubles, 41 RBIs, and, in a surprisingly statistic, only 4 home runs. Not bad at all for a rookie campaign stat-wise, but they do not measure up to what he did against one of the greatest pitchers of the modern era.

By June 27, 1994, the Expos and Atlanta Braves were neck-and-neck in the newly realigned National League East. The Braves, who had a wealth of talent, were the odds-on favorite to win the division, but Montreal was flush with homegrown talent that were only in their twenties. With confidence and swagger building after each win, the showdown in Stade de Olympique was at its peak.

I harkened back to the 2015 MLB Documentary “The Colorful Montreal Expos” and hearing the description of the game from French Canadian broadcaster Rodger Brolette. There was one quote he said that stuck with me from that piece: “The turning point of that [1994] season was Cliff Floyd hitting the home run against GOD - Maddux.” Hearing that, I needed to see not just the moment, but the entire contest. Thank goodness for the Montreal Expos YouTube page. Instead of only having the at-bat, they had THE WHOLE GAME.

So, I decided to sit down in front of my smart TV in my living room and JUST WATCH. Man oh man. WHAT a matchup it was. Two pitchers at the max of their abilities. The previously mentioned “God” Greg Maddux faced off against young upstart for the Expos, Ken Hill.

On a side note, Hill, #44, was the ace on the young Montreal staff. His windup was very interesting, as his right elbow did not drop before he released his pitch. Watching this entire battle, I truly got to enjoy what Hill brought to the table. In my humble opinion, due to the damn strike, he was robbed from getting a 20 win season, which was very obtainable. He was THAT good, and none shined brighter than he during this game.

As I sat and watched, the one thing this game provided me was seeing how aggressive Montreal was on the basepath. All throughout, watching Marquis Grissom run wild and stealing bases, including taking advantage of a Maddux errant pickoff throw to second and going to third, was absolutely incredible. Also, seeing “Sweet” Lou Frazier and Wil Cordero take chances was exciting as well. Even 24 years later, you can see how much the game has changed. The era of the stolen base and small ball philosophy has truly taken a step back in the modern Sabermetrics era of MLB.

The deeper the contest went on, Maddux and Hill settled into a great game. Hill commanded his stuff really well, but Maddux showcased to me, a pre-disposed Brave hater, his mastery of pitch control and location. It was unreal and so precise. Maddux was pitching an absolute gem.

Still tied at 1 in the bottom of the 7th inning, Maddux started to labor. Grissom went 5.5 hole for a single. After avoiding a pitch-out, Grissom wound up stealing second and third, while “Sweet” Lou walked...and stole second on the first pitch of the next at-bat. Following a Moises Alou pop-out to second, Maddux actually got the OK from manager Bobby Cox to intentionally walk Darren Fletcher, loading the bases for Cordero. On a 1-1 count, the loud Olympic Stadium roared when Cordero hit a sacrifice fly to drive in Grissom, making it 2-1 Expos. The next batter: Cliff Floyd.

During the entire sequence leading up to Floyd’s at-bat, you were able to see the anger and frustration from Maddux with catcher Javi Lopez, including frequent mound step-offs, and a couple of meetings between the pair due to the sheer loudness of the Montreal fans inside Olympic Stadium. 45000 strong made it unbearable for the Braves, and Maddux felt the pressure. It was all over his face.

In spite of that, Maddux bared down and attempted to get out of the inning against the 21-year old rookie. From the stretch, Maddux delivered his first pitch: offspeed outside for Ball 1. Not perturbed, Maddux went inside. Floyd tried to hold his swing, but he went around for Strike 1. Maddux then came in with a curve ball, but Floyd made contact. Sadly, it went foul down the third base line. Maddux, seeing a chance to get out of the inning, went back inside. However, it drifted a bit too in, causing Floyd to narrowly move out of the way. Meanwhile, Frazier jumped at the chase and stole third base. Even with a 2-1 lead, Montreal was still aggressive on the basepath.

With a 2-2 count, Maddux reared back for his go-to-pitch: a change up, low and away. Lopez set up his position and Maddux unleashed.

As the ball tailed off outside, Floyd swung his bat like he was swinging a 9-iron on the golf course. However, Floyd’s undercut made contact, and just like a Happy Gilmore drive, the ball went over 400 feet. The baseball sailed into the right field bleachers and David Justice stood and watched it leave the yard. The rookie took the Professor deep and left him speechless. 5-1 Expos.

Manager Bobby Cox pulled Maddux from the game, and the Expo faithful were going berserk. Minutes later, inside the visitors clubhouse, someone was going berserk as well: Maddux. The mere thought of being taken deep by a 21-year old rookie off his go-to pitch allowed him to absolutely tear apart the clubhouse, unleashing his frustration in the process.

After watching that game, I got mad. I wished that the Expos truly had that chance to be World Champions. They were aggressive, confident, and hard-nosed. They had youth and lots of it. They had talent. Most of all, they were GOOD. The Expos hit their stride, but never got that chance. The damn 1994 Strike killed it for the team, the fan base, and the city. It became a case of “What could have been?”

However, June 27, 1994 happened. Cliff Floyd made a memory. And it will live on forever for Expos. “God” got beat.

Jon Harder
thejonharder@gmail.com
Posted by Jon Harder at 10:48 AM No comments: